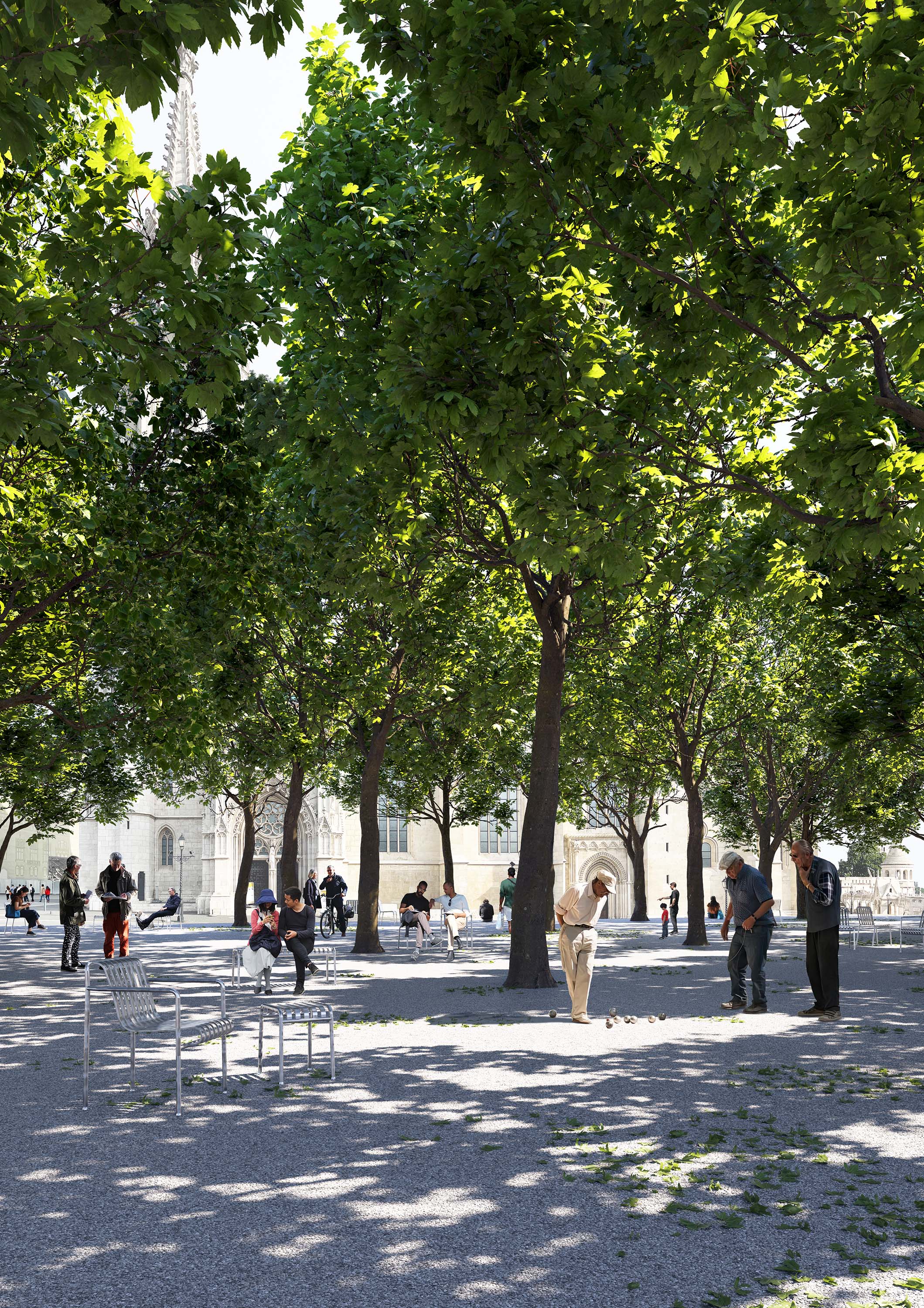 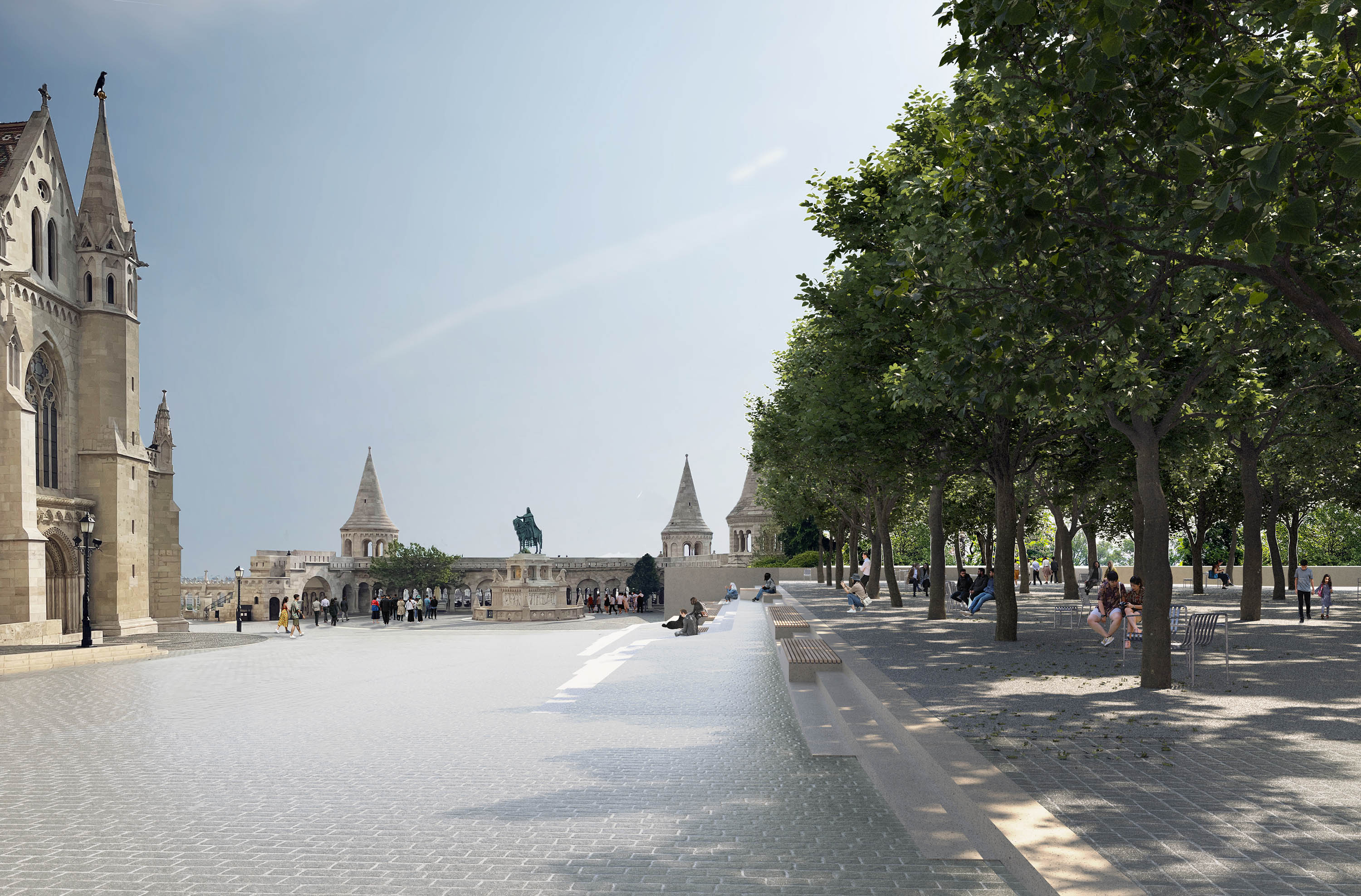 From an urban architectural point of view, the square 'walls' cry out for a continuation, a kind of closure. At the same time, recent years have also highlighted that the area is still a valuable element of the Buda Castle District in its current unbuilt form, as it is currently the only larger green area.

Since the Middle Ages, Polgárváros has always been a densely built-up area of Buda Castle. Such as the predecessor of the Matthias Church, the Church of Our Lady and its surroundings, which was built by the Jesuits in the 18th century.

At the end of the 19th century, Frigyes Schulek cleared the church from its surroundings and made it accessible from all sides and transformed it to neo- Gothic style. "Crowned" with the Fisherman's Bastion nowadays it is the most visited monument complex in the capital.

Hundreds of thousands of tourists visit these architectural and cultural landmarks every year, generating a huge crowd and thus a strain on their surroundings. During the renovation of the surroundings of Szentáromság tér completed in 2015, the paved surfaces of the area accessible to pedestrians and vehicles were arranged, providing a quality space and a dignified environment for the listed buildings. However, the development of green space related to the area has unfortunately been left behind.

Due to the increasing weather extremes in recent years, summer heat waves, hot and rainless days and weeks have become more and more frequent. Unfortunately, this is felt in the same way by the person gardening at home, the clerk trying to do his job at work, or the tourist visiting the Buda Castle District from the country or from abroad. We believe that precisely because of the changed - and, unfortunately, probably only getting stronger - weather trends, Szentháromság park can be considered one of the most valuable areas of the Buda Castle District - even in its current, undeveloped state - with a lot of green potential.

The current spatial structure of the park adapts to the functional units in its surroundings, but at the same time, it does not adapt to its surroundings either in terms of form, use of materials or quality.

In addition to the built elements, the plant application (shrubs) also gives the current park a strong closure. It does not communicate with its surroundings, there is a lack of visual connections with the external environment, and overall, the design of the current park creates an uncertain and unsafe feeling.

The developed vegetation of the area is characterized by heterogeneity. In addition to the old trees with large crowns, there are also younger trees with less dendrological value. The furnishing elements of the space also show a varied image. The use value of the furnishings is low, the benches are often poorly oriented, the drinking fountain is difficult to access, and the location of the waste collection containers is not ideal.

The landscape architecture and architectural concept for organizing the area formulates the park as a counterpoint to the surrounding paved surfaces with almost no green elements. Szentáromság park is defined as a green "oasis" of the Buda Castle District, which is intended to supplement the wider environment of the Matthias Church and the Fisherman's Bastion with an area of  high canopy tree cover that has a high ecological value and thus has a beneficial effect on the microclimatic conditions of the area. It does not simply complement its environment, but also clearly completes it with its intensity of green space that makes up for gaps.