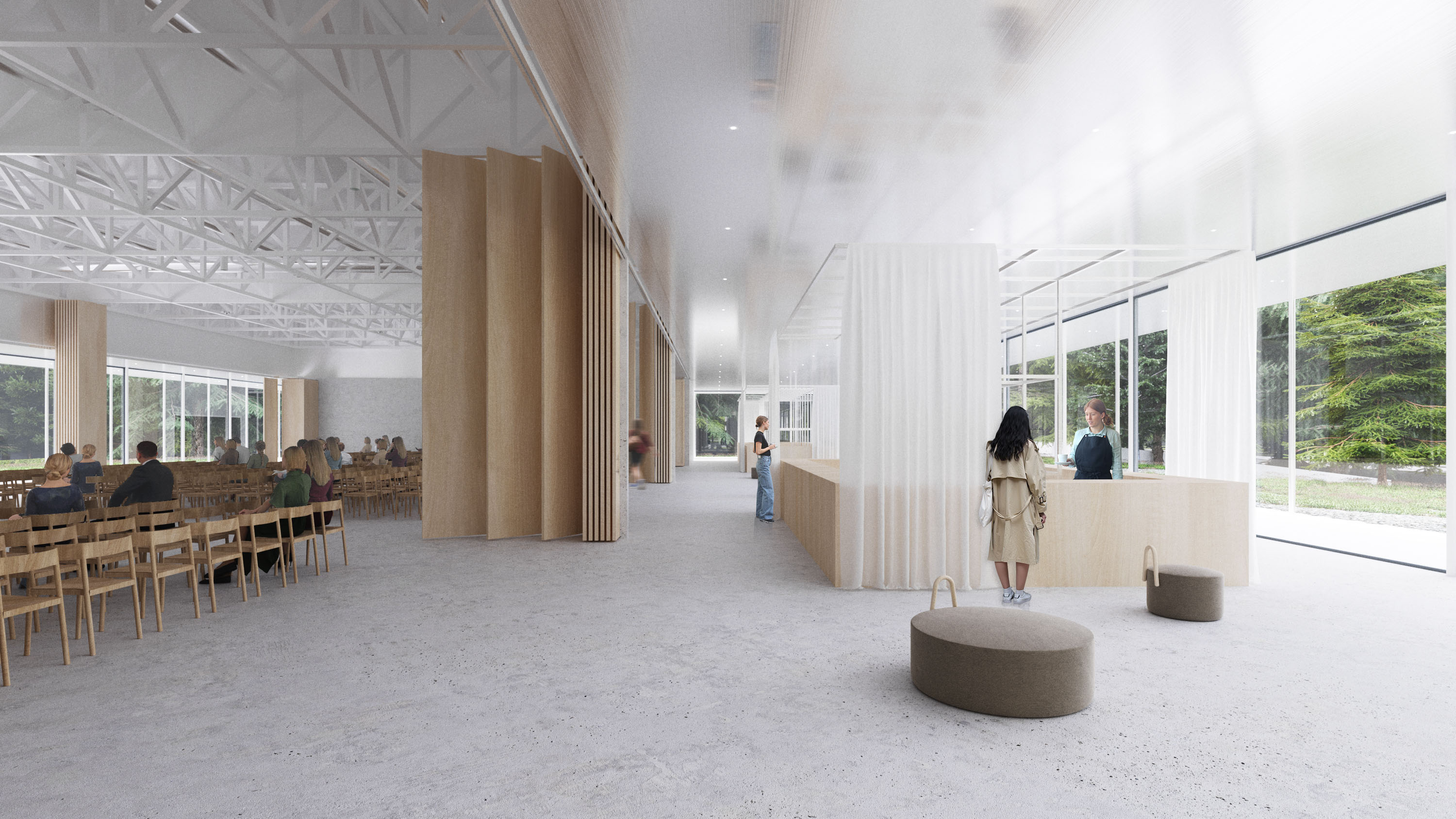 The plot, with intense green vegetation, has a natural grove-like park atmosphere. From the boulevard, a dense stand of trees protect its border, and there are also many valuable trees, shrubs and bushes in the undeveloped area within the plot. This is a great starting point of a more moderate, humble architectural behavior, that provides an opportunity to preserve and enhance the existing green environment.

The planned program is an international conference center for 700 people, which meets the challenges and requirements of the 21st century.

However, this sentence can and should be examined from many aspects and approaches.

One such aspect is compliance with the function. In this case, we could say that in addition to the large hall for 700 people, the house should have several section rooms, which requires warehouses and additional rooms, parking places for the planned number of people, and a restaurant with high. The planned square meters are multiplying with the image of a larger house emerging in front of us, with complicated logistics, strong background section, high organizational requirements and significant maintenance costs.

Another approach would be to build a house that leaves as little ecological footprint as possible and seeks to minimize interference with the natural environment and serve the expected function while taking these considerations into account. This assumes certain trade-offs from the user side, but we need to be able to decide whether these trade-offs can be made.

The principle of the smallest construction here means that three or four section halls will not be built next to the main hall, but we assume that in addition to the full use of the large hall, only 1 additional section hall will be built, which supports the operation of the large hall. However, in the absence of a large conference, the room can be sectioned, divided into one large and one small room, or converted into three small rooms. That is, assuming that a smaller event is held more than once in the life of the house for most of the year, the room can be sectioned for this case, and thus it is possible to accommodate many more events at the same time.

The transformability of the great hall can be solved architecturally and structurally, and all this can be ensured with less construction and energy consumption. The construction of a house based on the 3 in 1 principle takes up as little space as possible. This area is well below the built-up area of ​​the current hotel.

We intend to return the undeveloped area to the nature, to expand the forest and the park.

The center and soul of the building, the functional core is the great hall, which can be divided into three rooms separated by mobile walls. The ceiling height of the great hall is 7 meters, this ceiling height is necessary when 700 people are in the hall at the same time.

The long sides of the great hall open towards Lővérek körút and the inner part of the plot, thus there are direct, large openings overlooking the forests and the trees. This sight is very defining, the appearance of trees and green on the borders of the hall suggests that the boundary between the inner and outer space almost disappears, those present feel the closeness of the forest, the rustling of the trees.

We can enter the interior in any part of the house, the airy curtain wall surrounds our entire building. The slab of the flat roof extends towards the façade, the covered outdoor space around the house protects the house from sunlight and rain, this space also provides a great place for organizing and directing outgoing events.

On the two shorter sides of the room are the closed functions, on the west side of the plot there is the separately accessible restaurant part, with the warehouse and the section room. On the east side of the plot were the water blocks, changing rooms and offices.

We planned a -1 level installation of the same size as the ground floor installation. The garage with 100 cars underground and other 35 parking spaces ont he surface inside the plot can fulfill the required parking balance. In the case of the large conference, we planned to create car parks along the border of the plot on Lővér körút in the newly planted wooded part. This solution can provide the required number of parking spaces, but we think we only want to bring as many cars into the plot as we really need. In the eastern part of the plot, we planned some surface parking lots to replace the previous building, but these are planted so densely around with plants that soon the forest will be the dominant and not the gravel paved surface here as well.