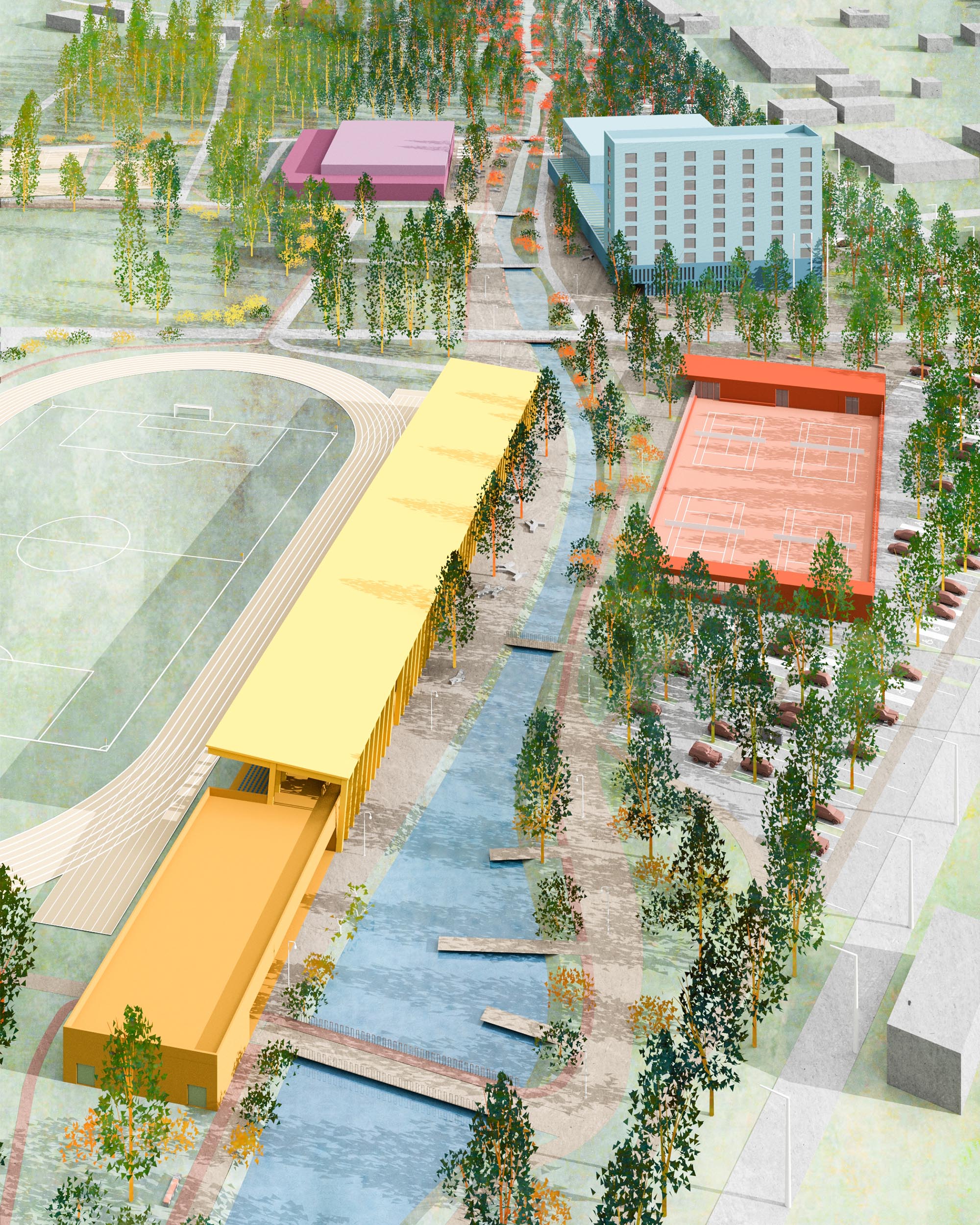 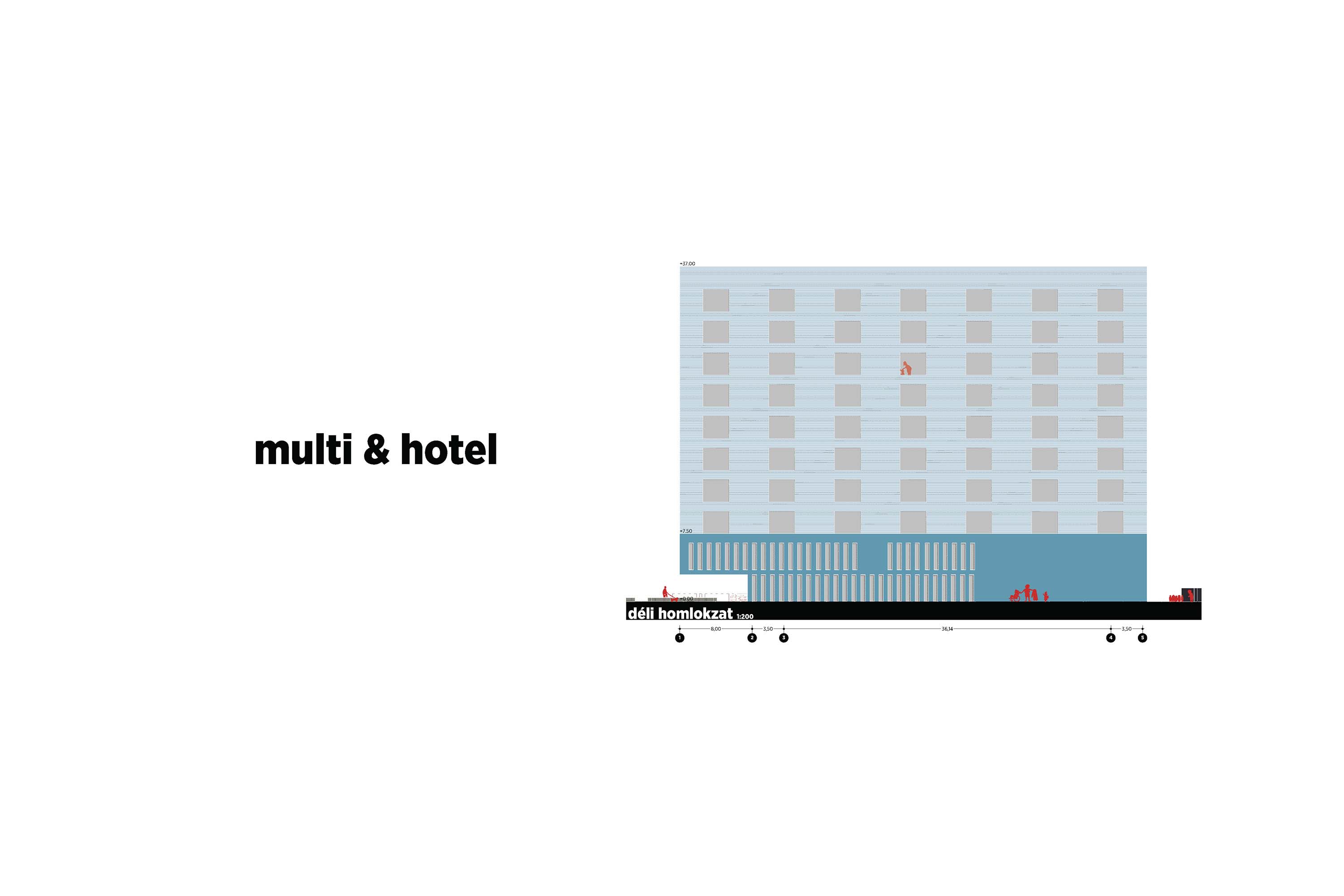 The development of the new Paralympic Sports Centre brings the opportunity to think about the long term future development of Bišumuiža district. To do so we have to look beyond the current state of the area by examining historical context and the broader connections of the construction site. Even though the borders of the intervention are restricted by legal boundaries of property lines the ripple effects of a new construction of this magnitude far extend those.

First and foremost there is a really strong presence of nature on the site. The north-south axis is defined by the Bišumuiža Ditch that used to run unregulated through the area also forming a pond at the site, while along the creek we find strong and unique vegetation.

Within the natural environment we find  the Bee Manor. The building once defining the center of the area is now left in an unworthy state with deteriorating condition  surrounded by industrial lots.

Both the natural and built elements create great potential  for the site, which is easily accessible from the city by public transportation, bike or cars.‍

The idea behind the general masterplan defining the long-term purpose of the area is Bišumuiža Sport- and Recreational Park. It contains the current development of the Paralympic Sports Centre, the future conversion of the Bee Manor into a local cultural hub, and the refurbishment of the natural environment around Bišumuiža Ditch as a sport and recreational area with emphasis on accessibility.

The built objects of the new Paralympic Sports Centre defines the more urban center of the developing area. The coloured volumes enclose the main square along the creek where events and gatherings can take place. Since the shapes are largely constrained by the functional order of the facilities they gain personality and stand out through their coloured facades. The hotel, integrated with the multifunctional hall stands out as a vertical sign, visible from the whole park and surrounding highways as well, marking the Paralympic Sports Centre within the city.

As we get further from the center of the development nature takes over the built environment where different pathways for running, walking and cycling run along and across the creek  intertwining the area. They run from the top of the park where they connect with the public transportation to the very bottom. It would worth the consideration to continue the bicycle and pedestrian connections as an underpass through the highway as well in the long term, to ever further the reach of the Bišumuiža Sport- and Recreational Park.

Motor vehicle access is key for not only the Paralympic Sports Centre but the whole recreational park, meanwhile it would also be important to find a solution so it doesn’t disturb the continuity and intimacy of the recreational areas. To achieve this the parking is organised along Gulbju iela. This way all facilities have close parking spaces but the division of them is also flexible and can be varied based on different events. ‍

The core of the outdoor areas was the Bišumuiža Ditch  and the existing trees on the site. The creek is reshaped so it has mostly natural but accessible shores, except next to the main square where it gets integrated into the built environment.

To preserve the natural and ageless character of the site pathways and parking lots are organised in a way as many trees can be preserved as possible.

Between the raw nature and memorable colorful buildings the built landscaping is kept simple and elegant as a flexible space for events, sports and recreation.‍

The sports facilities are designed as a composite structure, with a monolithic concrete base supporting a wide-span timber construction.

The ground levels where the floorplan is divided into multiple smaller rooms are supported by a rigid system of reinforced concrete walls, with core insulation to create a long-lasting, and sturdy presence.

Meanwhile the wide-span sport halls, and the repetitive structure of the sports hotel is a prefabricated timber structure, composed of cross laminated timber panels, and plywood glued beams and columns. This results in a fast and environmentally friendly construction, while humanizing the simple geometry with natural and warm materials. Timber is also a natural resource of Latvia that makes it a natural choice for the structures. The prefabricated structures are clad with colour painted timber boards evoking traditional Latvian architecture.‍‍

The multifunctional sports hall with accommodation and sports laboratory is the most prominent building in the new complex. To solve the connection between multiple functional units we arranged the majority of them in a two story base which keeps accessibility in mind but also answers the need for a smaller footprint and short access routes inside the building. The two level base also presents the opportunity to create multi-level spaces such as lobbies and the conference room while skylights keep the interiors well-lit.

The functional units are organised between passageways that go through the building making it accessible from both sides and connecting the interiors with the landscape. The access points for spectators, athletes and the hotel guests are separated each with separate staircases and elevators. The sports hall is located on the north end, directly connected with the lobby. The spectator seats are accessed from the gallery level, while athletes can enter the hall on the ground floor separated by an elegant staircase. Between the lobby and the athletes entrance is the group of training secondary sport facilities. The hotel and the multifuncional hall are separated by the conference hall on the ground floor, and the laboratories on the first level. The restaurant is located under the hotel next to the main square with outdoor connections.

The indoor running track is elevated in front of the building creating a spacious covered entrance area along the creek. ‍

The spectator stand next to the running tracks also covers the necessary indoor areas for the facility in a simple longitudinal order. The stands are accessible through multiple entrances along the creek, dividing the crowd. The block of the outdoor storages is distanced from the rest of the interior, creating an entrance to the outdoor areas as well.‍

The curling hall opens up with a passageway connecting the creek and the outdoor fields of basketball and volleyball. The passageway is filled with the lively cafe, with same level connection to the spectator seats. ‍

By itself the tennis facilities would create a tiny building compared to the other sport halls on site. To balance this the interior and the tracks are composed as one singular unit with an additional outdoor resting area.‍

The simple, perpendicular buildings occupy the site slightly rotated related to each other. This placement amplifies their unique character and better harmonizes the built structures with the national environment. While functionally all of them differ, some common basic principles define their character. All buildings are opening up from the creek and these openings cut through them as passageways providing an openness and inclusivity. The dual structural construction defines the building materials, the only difference here is the color of the objects.

One of the most important principles was to create a central main square between them where we can enter the new complex and instantly connect with visually and reach all the halls.