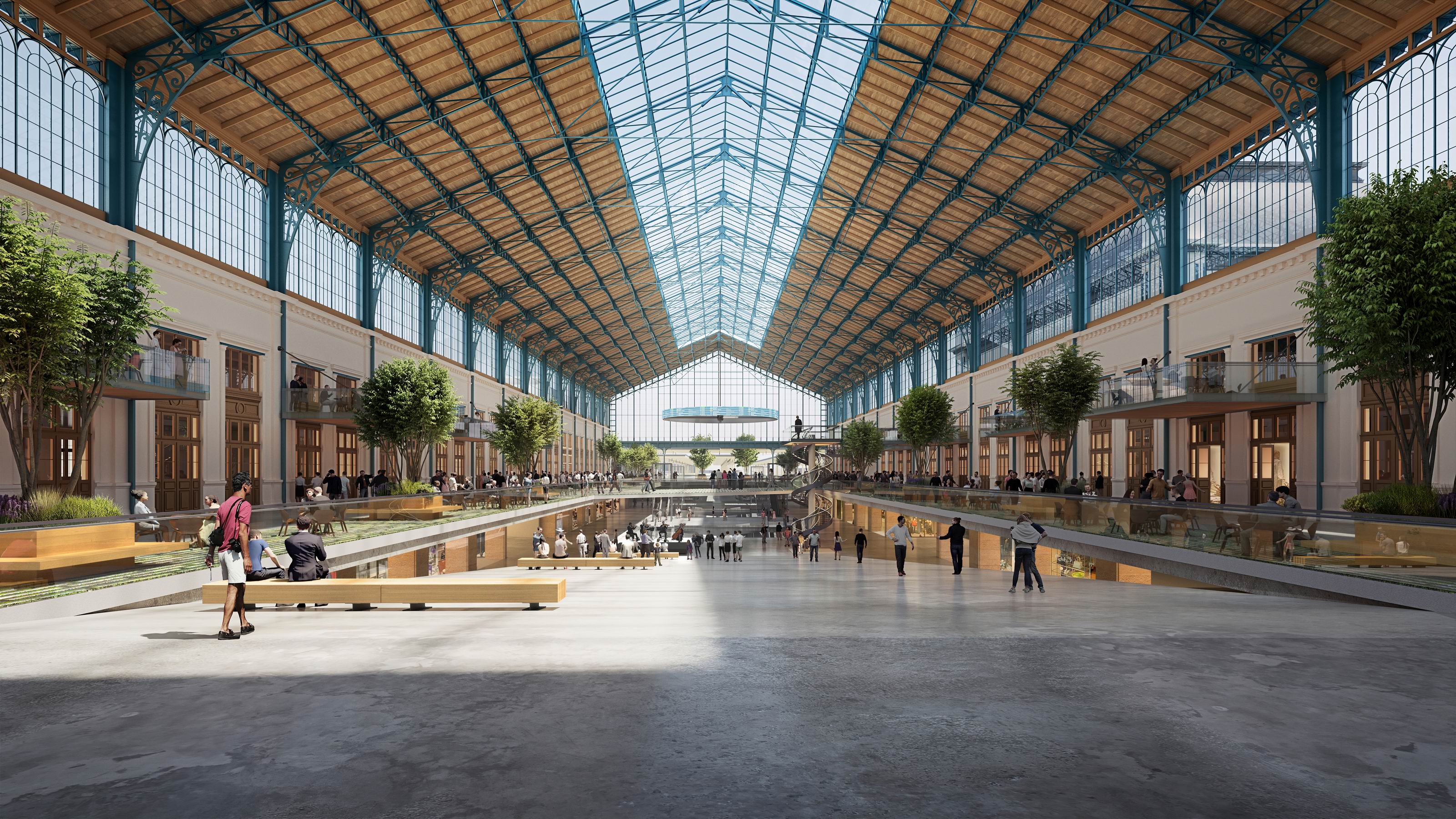 Awareness of the environmental emergency isthe foundation of our commitment and is deeplyembedded into our architectural practice. Seenthrough this prism, the profound restructuring ofNyugati station is much more than a ‘simple’ technical, functional, urban or aesthetic challenge.

It is for sure a question of adapting this former terminal station to the challenges of future mobility. Bymaking it a strategic, effi cient hub, dedicated to multimodal connections, it shall serve the city’s needsand achieve a balanced development. It is defi nitelya major urban regeneration project and an opportunity to generate new links for slow mobilities within acoherent urban fabric.

Anchored in the 21st century and its ecological transition, it must also become a true demonstration project and be exemplary in every aspect, by minimisingits environmental impact. Responding to the greatlandscape of the Hungarian territories, its living species and inhabitants, it will have the ability to adapt tofuture climate conditions.

We similarly found it crucial to respond to thechallenge of the «Great Acceleration of the world»:social and societal changes are taking place and areintertwined. The need for stability, remanence, reconnecting peoples with their history, culture and environment is pressing.

Economic development and ecological transitionmust also allow the reconnection with historical, cultural and territorial links. They reinforce relationshipsbetween inhabitants, opens up opportunities for serendipitous encounters through a programming ofmulti-purpose places. In short, the ‘modernity’ broughtby any urban project must also serve the people, in anon-disruptive logic.

Emblematic, the new «NYUGATI PARK» station willinspire and nurture Budapest’s evolution towards a«calmed urban metabolism»: for the development ofthe city, and the “living» - toward its nature, territories- and toward Humans. It is a soft and respectfulapproach for all existing communities and the environment, with a resolutely humble approach, as resilient as possible.

In order to achieve this, our proposal is based on fi vemain axes:

1. Bringing out the great landscape into Budapest

A major urban park, connected to the wider Budapestlandscape, provides a continuous ecological corridorby using the railway tracks leading to the heart of thecity. Mitigating the urban island eff ect and increasingbiodiversity, the park also provides a pleasant urbanenvironment for residents and visitors discoveringBudapest once they arrive in Nyugati.The surface intervention is optimised. Most of thesurface area is dedicated to the planting of an urbanforest of 10,000 trees using local species. It spreadsover an area of 7 hectares made of natural soil collected from the 340,000 cubic metres excavated forthe railway tunnel. This forest will surround the station, providing a green setting for passengers andbecoming the green lung of the neighbourhood.Through the newly created landscape of Park Nyugati, its water features and vegetation, our proposalprovides tangible answers to the climate emergencyand the anticipation of global warming. Especially inthe heart of an intense metropolitan area where heatwaves may be amplifi ed by several degrees.

The humble attitude of the proposal is infl uenced byBudapest’s millennial past and its exceptional builtheritage. We therefore propose to emphasize thehistory by not building a «disruptive architecture» butby revealing the great architectural and urban qualities of the built heritage.The hall, built by the «Ateliers Eiff el» in 1877, reemerges in a restored splendour: its fourth façadeis freed up, its entrances re-opened to the city withdirect link to the Danube River. The ‘past’ accommodates a sustainable future, where caring, maintaining, repairing, reusing and passing on the geniuisloci become prominent activities. Celebrating thehall by the intensifi cation of its uses and creating newpaths and views; making all facades visible and in asubtle dialogue with the horizontality of a canopy asthe only emerging built element.

3. Building a station with a small environmental footprint

The environmental cost of the building is essentially contained thanks to the right dimensioning ofeach element, the discernment between technicaland technological choices and the expected level ofcomfort.Thus we propose not to build any enclosed, air-conditioned and/or heated spaces in addition to the historic hall.Using natural ventilation below ground and large fansduring hot summers will magnify the hall and providea gentle coolness for all users.A simple canopy protects passengers accessing thetrains on the surface. This canopy is equipped with20,000m² of photovoltaic panels which, in additionto a solar farm on the north part of the building, willproduce the electricity needed to operate the entirestation. This will make it the fi rst energy self-suffi cientstations in Europe.Existing buildings are all preserved. Without compromising on quality, beauty and nobility of the structures,carbon emissions during construction and energyconsumption are optimised; materials are chosenlocally, bio-based or geo-based (wooden structures,reused materials, locally produced concretes, etc.).Thus, by reducing its energy needs, the large perimeter of the station produces part of its own needsand is part of the ambition of a post-carbon worldsoon to be free of fossil fuels...The project will take place over several stages wherethe transformation of the current station integrates issues during its transformation (disturbance causedby on-site work, rail transport operation during thetransformation, etc.) as well as the possible modifi -cations once the project is delivered.

In strict compliance with the specifi cations, the stationensures optimal operation for both passengers andoperators; wayfi nding is clear and intuitive, thanksto the creation of a covered transverse walkway.The ramp, the redesign of the circulation under thehall, the multiple visual relationships (inside/outside;hall/underground station) provide simple and legibleroutes. Comfort is assured essentially by passivedevices. All the spaces, including the undergroundlevels, are naturally lit, thanks to the carefully slopedembankment, allowing a direct access towards thepark, opening views to the sky and letting the lightin. Nyugati Park Station becomes a fl uid and openstation, accompanying the fl ow of passengers in anaturally simple way.

5. Making the station a "place to live" - multiple uses

Each designed space is multi-functional allowingan intense use of the premises. The historic stationcan host commercial, tertiary and cultural activitiesand blends with the hustle and bustle of Budapest...This may include music concerts in the central ramptemporarily becoming an amphitheatre; the exteriorspaces (transverse alley, park circulations) can welcome some events of the hotel complex and its cultural centre. The Nyugati Park Station becomes a destination, a place on its own (with children’s games,small cultural and other sports facilities, etc.). A slownetwork provides a smooth way for pedestrians andcyclists to reach every part of the district by carefullystitching together the urban fabric.

A station that will become the driving force of theecological transition; a station that will serve the«post-carbon» society that we are going to build; afunctional, intuitive station, an effi cient hub servingall forms of mobility, phasing out fossil fuels; a station that is close to communities, in a peaceful yetdynamic neighbourhood, ‘re-natured’ and preserved;a humble but timeless station, anchored in the past,a familiar place for all, proud of its history. This is thevision that we propose for Budapest.